Tonight was speed work night for me at the track. I was all ready to go with the agenda in hand, literally: 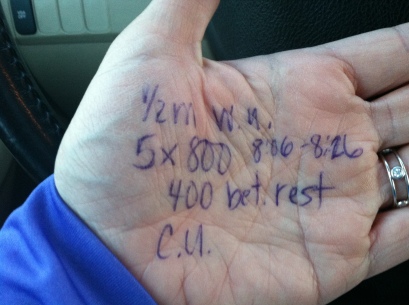 When I arrived at the track, I discovered that tonight was also a high school boys’ lacrosse game, with my usual entry gate was closed a locked. I figured perhaps they were charging admission to this one. I’m not paying to run unless it’s a race, and I’m certainly not paying to run in front of a bunch of lacrosse dads! I thought to myself.

Then I spotted this sign for the cross-country trail.

The alternative is to bail. I did not shave my legs for nothing.

Lacrosse? Ppfffttt. My sport is your sport’s punishment, ninnies! and off I went down the trail.

The cinders, steep hills, mulch, grass, roots, and errant jaywalking bunnies made for some rebellious achilles tendons. But once I was warmed up, I kind of liked it. I felt a little like Katniss, if Katniss had a mummy tummy. Though if I were really Katniss, the cannon would sound and the hovercraft would be swooping me up by now. Also, I’m out of milk. These are the things that go through my head when I run.

Two loops around the grounds at 1.5 miles each, and dark is setting in. I was ready to call it a night at 3 miles, when I noticed people coming out of the exact fence I was trying to get into. It turns out, there’s a subtle-sneaky (but legit) fence opening around the corner that I’ve never noticed before.

I could’ve run on the track after all. DUH!! It even photo-bombed my picture and I didn’t even notice. Geesh.

The lacrosse game was over, so I ran the last mile on the track, feeling strong but also pretty darn stupid. So much for speed work, folks!

Redding Road Race "Run For the Cows" Half MarathonMay 1st, 2016